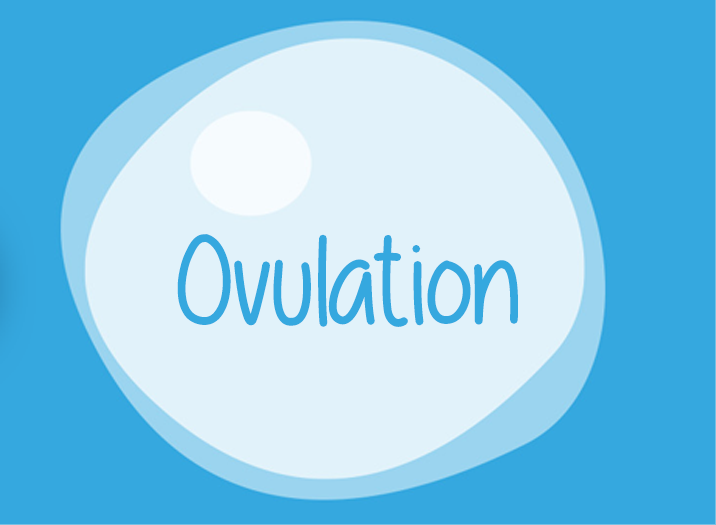 OVULATION IS THE TIME IN YOUR CYCLE WHEN YOU OVULATE.

BUT YOU KNOW THAT ALREADY!
BUT HOW DOES IT WORK? I’LL EXPLAIN EVERYTHING HERE!

Let’s start from the very beginning:

The secrets of ovulation

So, ovulation takes place smack in the middle of the cycle. It’s when one of your 2 ovaries expels an egg that’s ready to be fertilised.

From the very start of the cycle, both ovaries prepare follicles that grow until one is mature enough to become an ovum.

Each month, the ovaries take turns expelling an egg that’s ready for fertilisation. Sometimes you can feel a slight pain on the side where you’re ovulating.

During ovulation, the egg is released and moves towards the fallopian tubes as it waits to be fertilised.

The days just before and after ovulation are the days when you can get pregnant.

Some sperm cells can survive for a few days in the uterus, so you can have sex on the days leading up to ovulation, especially if you want a girl!

The egg also remains fertile for about 24 hours: try to have sex on same day or the day after ovulation, especially if you want to have a boy!

How do you know when you’re ovulating?

To determine exactly when you’re ovulating, you can rely on your temperature curve. You’ll need to take your temperature every morning before getting up, write it down, and look for changes.

The temperature increases by a few tenths of a degree during ovulation.

The problem is that you’ll only find out that you’ve ovulated the next day!

Cervical mucus is a substance secreted by the cervix.

Before ovulation, cervical mucus is scarce and difficult to detect.

Starting several days before ovulation, and especially the day of, the cervical mucus becomes more abundant, fluid and sticky. That’s how you can detect ovulation.

It means you need to pay very close attention to your secretions!

Ovulation tests detect the level of hormones in your urine.

You’ll need to take a little urine sample in the morning in the days leading up to the predicted ovulation date and dip a test strip in it to check if your body is getting ready to ovulate.

In your MyBuBelly box, you’ll receive simple and practical ovulation tests every month to optimise your chances of getting pregnant!

Once the egg is fertilized

Once the egg is fertilised by a sperm cell, things start to snowball very quickly!

They merge to become your baby’s first cell, which snuggles down cosily into the walls of the uterus.

Watch this YouTube video to see how ovulation works in 3D: https://www.youtube.com/watch?v=4Ntu67u2W6E

Want to have a baby? Would you rather have a girl or a boy? Check out our MyBuBelly method to optimise your chances of getting pregnant and choosing the baby’s sex!

Powered by Convert Plus